In recent days I’ve been in a gaming slump. Personally nothing new has been happening and simultaneously it seemed like no new games were interesting simply because there is just a lot of remakes of the same stuff from the past. Now don’t get me wrong I do enjoy getting my hands on a super enhanced version of an already awesome game. But honestly nothing beats a brand new title with new concepts, characters, insane graphics, and brilliantly written story line. Control has been just what I needed to dive back into gaming realm and lift my gaming spirits. Control was just released a few weeks ago and it has received decent reviews across the board. While on the surface it seems like a simple third person shooter, the game actually has a deep and well written story. You take on the role of Jesse Fayden the newly appointed director of the Federal Bureau Of Control. When you start the game you have no clue what is going on but you are made aware that the Bureau of Control has been up to no good.

Similar to the secretive government conspiracy ideas in the popular show “Stranger Things” the concept of conspiracy is littered everywhere throughout the game and serves to peak your curiosity as to what is really going on. I found myself getting insanely excited about exploring this secretive NYC location and uncovering the truth, for Jesse’s sake and for my own.

Remedy brilliantly combined these elements of conspiracy and a dark organization to craft a dramatic conspiracy story that uncovers the weird and sometimes creepy nature of other dimensions, entering the astral plane, and secret objects of power which the Bureau has been experimenting with.

Now I can see how this idea of a woman lost in this shady government building may seem uninteresting at first, but as you progress through the game you come to learn that Jesse has been affected previously by one of these objects of power and it has allowed her to gain telepathic abilities. These abilities include telekinesis, mind control, and levitation to name a few. Not only are these abilities awesome, Remedy has taken great care to make sure they feel as powerful as they are visually stunning. These abilities are one of the staple game play features and are so brilliantly executed, you always feel like some kind of powerhouse “X-Men” character.

Along the way Jesse happens to come across a weapon of an unusual nature, a pistol which has a literal shape shifting ability. This weapon is a tool for Jesse as she dives deeper into the Bureau fighting mind controlled agents of the mysterious opposition called the “Hiss”. And in classic RPG style you can upgrade it and attach mods along the way as well as create other versions of itself which act as other weapons. Jesse can use both her weapon and telekinetic powers interchangeably which gives you the freedom to take down your enemies anyway you so choose.

Without giving too much of the story away, Jesse also has her own personal objective of finding her kidnapped brother which the agency had taken years ago. Learning more about Jesse’s powers and her long lost brother raised so many interesting questions and I found myself becoming more engaged and emotionally invested in her. 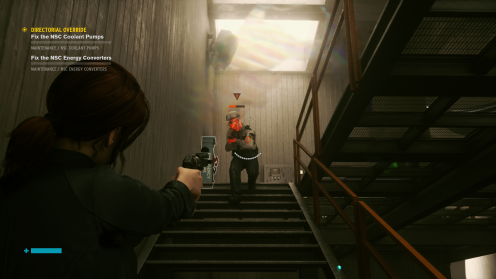 Playing Control reignited my inner passion for writing about video games. As I dived further into it’s story I kept thinking about all the cool things that were included. You had this interesting female lead character who is rich with backstory and relatable goals. There is this cool and sketchy building “hidden in plain sight” setting in NYC and awesome character abilities and weapon options. All tied together with stunning graphics (probably one of the best looking visuals this year), crisp gameplay and interesting/ weird (in a good way) characters who I always found to be helpful yet suspicious.

As I played I kept seeing inspirations from much older games like ‘Psi-Ops’ and ‘Max Payne’ combined with story telling from ‘Stranger Things’ and this almost ‘Alice in Wonderland’ kind of feeling that you continue to dive deeper and deeper into the Bureau’s seemingly never ending levels all with their own secrets.

Finally, Control is an amazing new video game which definitely takes a lot of risk diving into a market filled with so many expectations and yet still stands strong. While I still haven’t been able to finish the game nor play it with ray tracing or maxed visual settings (since I don’t own a RTX graphics card) it still is an amazing experience so far.

If you are interested in trying out a new game with fresh story telling interesting concepts and satisfying gameplay Control may be just right for you.

Hello and welcome fellow gamers! My name is Alex. I'm a hardcore gaming enthusiast, and writer/blogger from New York City. I have been gaming since childhood and it seems to be my calling in life. I created Inside A Gamer's Life to talk about games in depth and teach others that there is more to video games that they may not know about. Video games are an art form. As well I am hoping to teach as many people about living a healthy gaming lifestyle along the way through moderation to minimize damaging habits that can lead to game addiction and depression.
Loading Comments...
Comment
×
%d bloggers like this: